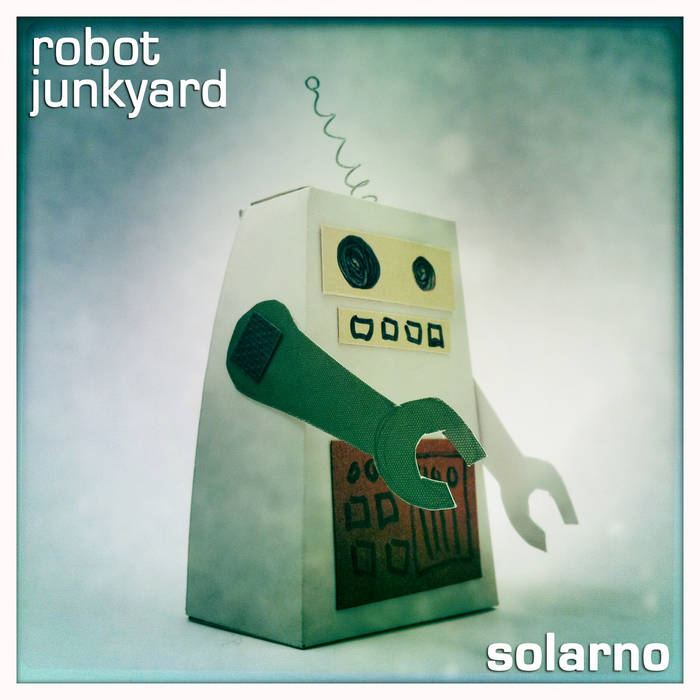 Robot Junkyard is as much an experiment in simplicity as it is an album of body-moving electronica. The sophomore effort from Los Angeles based producer Solarno (aka Jim Furey) takes its inspiration from the humanity of robots and a single synth. Bringing together vestiges of 70’s and 80’s synthpop, 90’s techno, and a touch of the 8-bit revival, Robot Junkyard contains plenty of pulsing bleeps, sweeps, and chimes to keep one bobbing their head with the beat and humming the melodic hooks. From the shimmering digital bells that open Cross Platform Discoteque to the thunderous symphony of kick drums in Cyclic Connection, Robot Junkyard takes you through a sonic world filled with dance-floor igniters with a few unexpected surprises thrown in.

Binary Alphabet starts the album off with a cryptic vocal line, blends in additional musical mysteries of language, and slowly morphs into an epic trance journey. Cross Platform Discoteque, with it’s ethereal opening, explodes into a synthpop rocker with a profusion of hooks that days later will still be in the brain. With Fuzzy Logic, Solarno eschews all percussion in favor of a pop-friendly, grit filled world of digital distortion and constantly devolving sounds. Digital Singularity and Digital Information allude to the acid house days of The Shamen and their classic track Ebeneezer Goode, albeit without the blatant references to drugs and rave culture. Walk Along Little Robot is the emotional leader of the album, bringing a purity of synthpop purpose. Where Walk Along is emotionally pure, the following track is most certainly not. If robots are to have human emotion, then they will also have human desires. The Replicators explores the world of digital carnal delights with a mix of downtempo funk and robot exuberance. Cyclic Connection is the most dramatic track encountered thus far, moving between orchestrally inspired melodies and hard charging percussive elements. Influx brings the listener back once more to a purer, relaxed synthpop sound. Rise is a truly uplifting piece, encouraging the listener to float back to the dance floor after the drama that was Cyclic Connection and the recovery piece that was Influx. With the dark closing track, March of the Robot Junkyard, one can easily imagine the bucket-laden brooms from the Sorcerer’s Apprentice as evil robot minions, endlessly go about their appointed rounds of mischief.

This album originally came to being out of an exercise of simplicity. To that goal, nearly all sounds on robot junkyard originated with the very simple, yet very rich EFM onboard synth of Logic Studio 9, with various after-effect plug-ins. The only exceptions are the vocoder lines in Binary Alphabet and The Replicators, and the majority of the percussive sounds, for which I utilized Ultrabeat. All sounds of Influx originate from the EFM synth.

For more information on the creation of this album and individual tracks please visit: www.soundsofsolarno.com

All tracks written, programmed, recorded, engineered, mastered and produced by Jim Furey at The Robot Junkyard between June 2009 and September 2010.

THANKS: to my stunningly awesome wife Lisa, my Mom, Dad, and sis, my dayjob cohorts, the Haptic Synapse crew, the designers at Apple, the engineers at M-Audio, the staff at CDBaby, Paperacorn for Boxel, the makers of Hipstamatic, and of course, robot lovers everywhere.

EXTRA THANKS: to those who still buy physical CDs. Yes, digital distribution is the future, but nothing beats holding a finished product in your hands. I’ve always felt that the packaging and artwork that accompanies an album is just as important as the music itself.

Photography and art design by Jim Furey. The cover robot Boxel is a prototype paper box robot created by Jess Wolf. More paper box robots can be found at www.paperacorn.net. Photography done with an iPhone 4 and the Hipstamatic lens/film set.

You can follow Solarno through the following sites:
www.twitter.com/solarno
www.last.fm/solarno
You can also find me on Facebook. Just search Solarno.